On September 11, 2013, the Wichita State University Libraries celebrated  the 2 Millionth Volume added to its collections.

This volume highlights the University's growing prominence at the national level.  During the celebration, WSU President John Bardo noted that a well-equipped research library helps students improve their education and ultimately strengthens the citizenry of the state of Kansas. 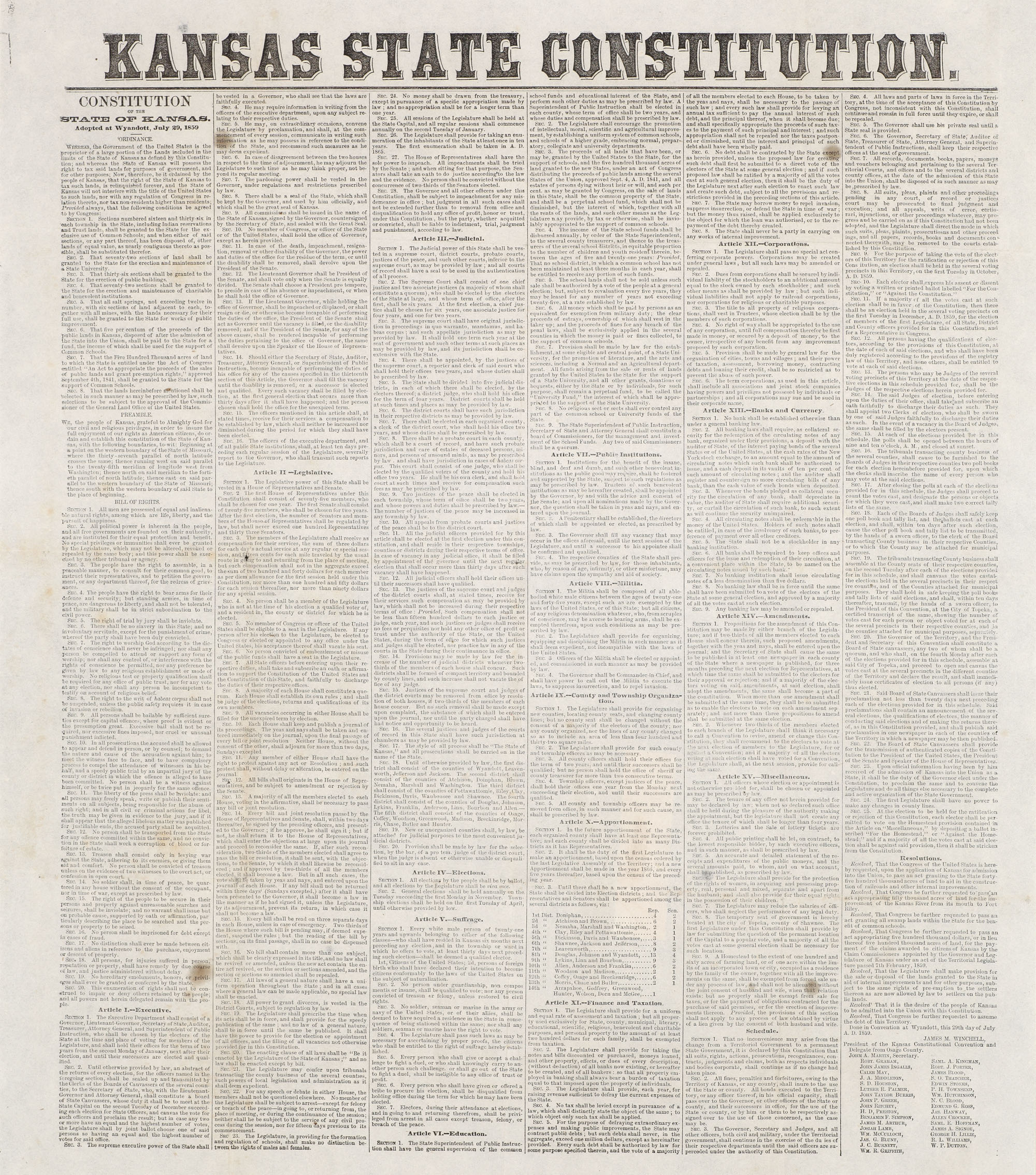 WSU Libraries' 2 Millionth Volume is a rare broadside printing of the Wyandotte Constitution, one of only three known copies.  A second print copy is at the Newberry Library in Chicago and a third one at Harvard.

The Wyandotte Constitution, named for the city where it was adopted, was the legal instrument under which Kansas was admitted to the Union.  Each of the copies was printed in Leavenworth, at the State Register Office, as explained by a small yellow label attached to the reverse side of each of the documents.  Many Kansans would have read the document in this broadside format.

When this document was written in 1859, the territorial legislature was controlled by those who wanted the state to be free of slavery.  They held a convention to draft  the fourth attempt at a constitution. 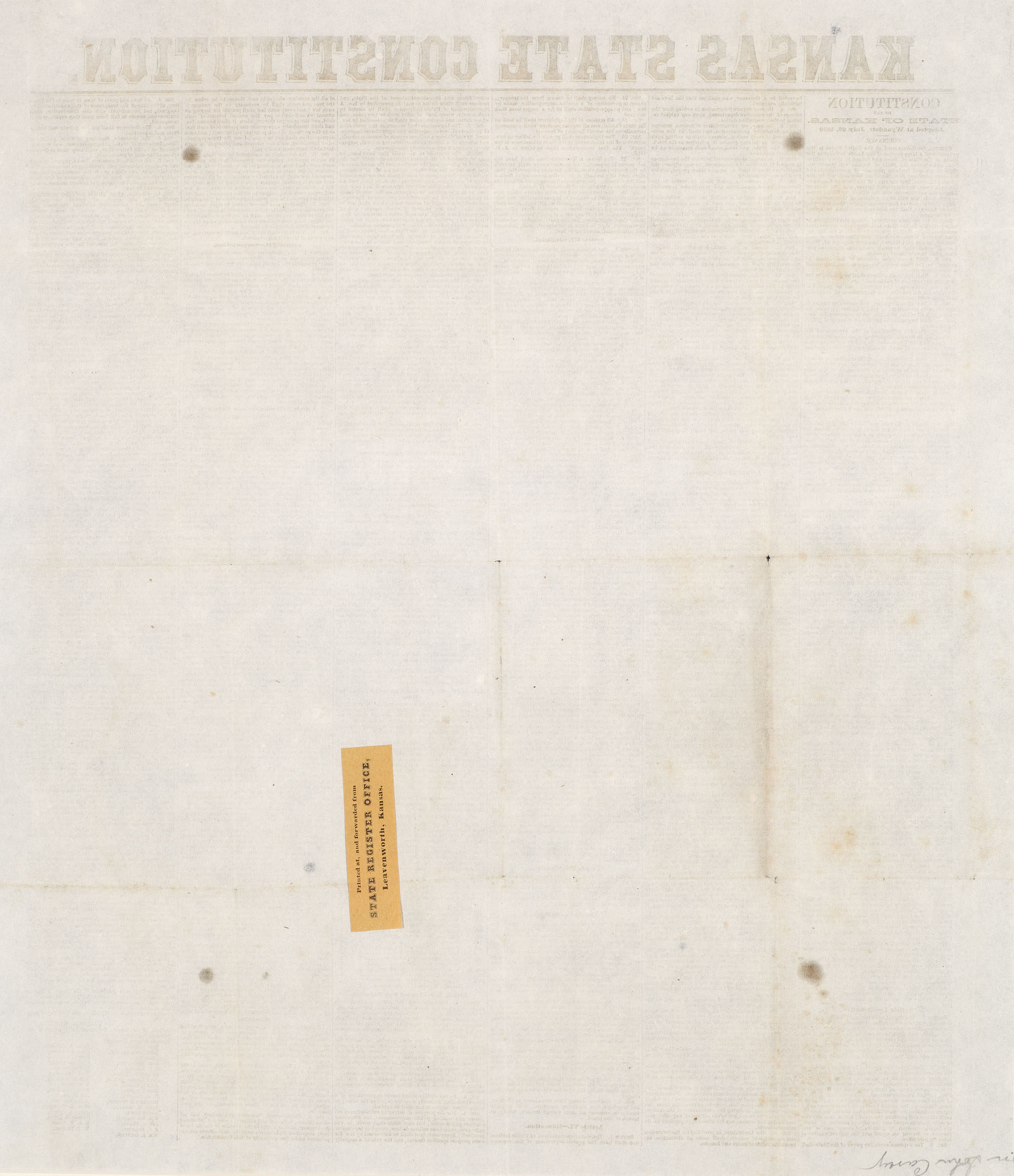 Unlike the three previous ones, the draft gained the approval of both a majority of Kansas residents and the U.S. Congress

The delegates crafted a document which excluded slavery (Bill of Rights, Sec. 6), but which granted suffrage only to white males of 21 years and older (Article 5, Sec. 1), thereby denying blacks, Native Americans, and women the right to vote.  The constitution did grant women the right to participate in school district elections (Article 2, Sec. 23), and to own property, and it gave women equal rights in the possession of their children (Article 15, Sec. 6).

The document also responded to the prevailing sentiments of delegates who considered the huge territory as a drawback and fixed the western boundary of Kansas east of the Rockies at 102° west longitude (the 25th Meridian).

The convention adopted the constitution on July 29, 1859, over the opposition of all the Democratic delegates who were outvoted by the Republican majority.  A bitter partisan contest for ratification followed along the same party lines, and on October 4, 1859, supporters won by almost a 2 to 1 margin (10,421 to 5,530).

Copies of the proposed constitution were sent to the U.S. Congress and a bill for Kansas’s admission was introduced on February 4, 1860.  Although the House of Representatives passed the bill, southern senators delayed its passage in the Senate.  The election of Abraham Lincoln in November 1860 and the departure of southern senators as their states seceded from the Union decreased opposition to Kansas’s admission as a free state.  On January 29, 1861, Congress voted to admit Kansas as the 34th state in the Union and to accept the Wyandotte Constitution as the charter of the new state.  Although many of its provisions were changed over the years, this constitution remains in legal effect to this day.

WSU Libraries acknowledges the generosity of Michael Heaston, who underwrote the acquisition of this noteworthy volume to the collection.  “It is an extremely important day for Wichita State University,” said Heaston at the celebration. “The Wyandotte Constitution is the most important state document an academic institution or museum can acquire, and it is the foundation for the great state of Kansas and the freedoms we know today.”

Images in this digital exhibit may be in the public domain or under copyright which is protected by U.S. Copyright Law (Title 17, U.S. Code).  Images in the public domain are made available for use in research, instruction and private study.  Copyrighted materials may be used for research, instruction, and private study under the provisions of Fair Use, outlined in section 107 of copyright law.  Publication, commercial use, or reproduction of a copyrighted image that does not fall under the provisions of Fair Use or the accompanying data requires prior written permission from the copyright holder.  User assumes all responsibility for obtaining the necessary permission to publish (including in digital format) from the copyright holder.  If publishing this image in print, electronically or on a website, for research, instruction or private study, please use the citation "Courtesy of Special Collections and University Archives, Wichita State University Libraries" and inform us of your use at specialcollections@wichita.edu.  For other uses of materials, please contact us.