Visit a librarian at the Reference Desk on the first floor of Ablah Library or contact a Subject Librarian to make an appointment. See the full schedule of library hours for the main library (Ablah) and for the Chemistry and Music branch libraries. Ablah Library hours are also available on an automated phone line: 316-978-3581.

Email a librarian with your question. 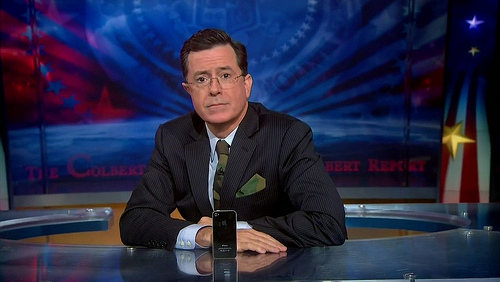 For years, television shows such as Saturday Night Live, television personalities such as Jon Stewart, Stephen Colbert, and Keith Olberman, and publications such as The Onion or The National Lampoon have generated satirical news coverage of United States politics.  This practice has become pervasive enough to have had media reports and works of scholarship dedicated to analyzing it.  Ironically, satirical news coverage can influence the beliefs held by members of its audience just as much as news coverage that purports to be objective.

Sources of satirical news exist in other languages and in other parts of the world, too.  In France, for example, the weekly journal Charlie Hebdo and the TV program Guignols D'info ("News Clowns") offer French-language satirical news.

Image by Derek Steen, used under the Creative Commons license.

Jon Stewart on humor and an informed public 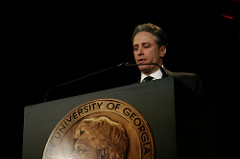